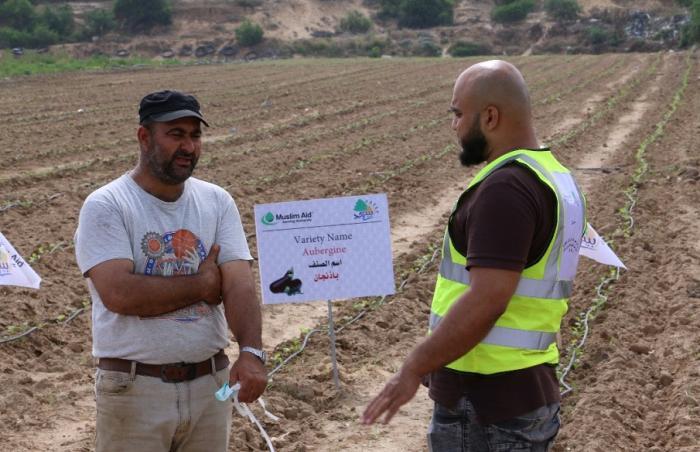 Ghazi Heji is a great success to the project. He is responsible for managing agricultural land which was totally destroyed during the 2014 war. Ghazi is an unemployed 40-years-old-experienced farmer who lost his land’s facilities during the war. Since then, he has been suffering to provide the core needs for his 9 children. For 4 years, he tried on many levels to rehabilitate his land in order to restore a safe food security status but all of them went to failure; depression held him.

During the preparation phase of PAEEP’s project: “From poor farmers to poor families: Restoring livelihood of small scale farmers in Gaza Strip” Funded by Muslim Aid (MA), Ghazi was identified as an eligible beneficiary to receive support. His land was selected for rehabilitation and planting.

However, soon after the work started on his land, the team faced many problems regarding the irrigation and carrier lines. Nevertheless, Ghazi showed a great spirit and dedication to restore his land, so he with the help of PAEEP’s team worked out a solution for such problem and worked day and night to repairs his land.

The result is fascinating; Ghazi is now the most successful beneficiary of the project. He is now fully capable of cultivating his land “for four years that I’ve been struggling to reach this point, I have always imagined that God will respond me and he did, through Muslim Aid. Thanks!” Ghazi said.