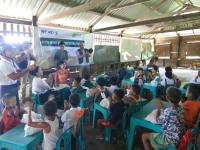 Described by UN Secretary-General Antonio Guterres as "one of, if not the, most discriminated people in the world", the Rohingya are one of Myanmar's many ethnic minorities. The Rohingya, who numbered around one million in Myanmar, are one of the many ethnic minorities in the country. Rohingya Muslims represent the largest percentage of Muslims in Myanmar, with the majority living in Rakhine state. They have their own language and culture and say they are descendants of Arab traders and other groups who have been in the region for generations.

Muslim Aid operates in Rakhine State, located within western Myanmar, which is relatively underdeveloped compared to other states and regions in the country. As a result it suffers from the second highest rate of poverty (almost double the national average) in Myanmar, with regular tensions and conflict between Buddhist and Muslim communities.

According to the Myanmar - Humanitarian Needs Overview (HNO 2019), there are 715,000 people who need humanitarian assistance in Rakhine State, including 128,000 living in International Displaced Peoples (IDP) camps in Central Rakhine, 470,000 non-displaced stateless people and 116,864 other vulnerable people. Due to severe curtailments to access for Muslim communities from 2012 onwards, children living in the IDP camps (and some children living in Muslim villages who do not have access to a Government school) continue to depend on access to primary education from Temporary Learning Centres (TLCs) and Non-Formal Primary Education (NFPE) centres supported by humanitarian agencies.

Muslim Aid led on the following integrated and complementary activities: