UK Qurbani: 50% of Muslim households are in poverty

With the cost of living spiralling out of control and inflation at 9% - the highest rate in 40 years. Half of the UK’s Muslim population will struggle to afford enough food for their families with an estimated 50 per cent of Muslim households in the UK living in poverty, compared to 18 per cent of the total population. Now more than ever is there a greater need to support families right here in the UK this Dhul Hijjah.

What is UK Qurbani?

“Once our beloved Prophet Muhammad (PBUH) was asked, what is Qurbani? The Prophet (PBUH) answered: ‘It is the Sunnah of your father Ibrahim (AS). For every hair of the Qurbani, you receive a reward from Allah (SWT)” – Tirmidhi

Qurbani refers to the act of sacrificing particular types of animals, such as sheep, cattle, or goats, for the love of Allah (SWT). Muslim Aid is proud to be the first charity to begin giving Qurbani in the UK specifically tailored to impoverished families right here up and down the country. Give Qurbani in the UK

We launched this much-needed initiative in 2015 for families and single parents struggling with acquiring basic needs. Muslim Aid supports the idea that “charity begins at home” and in accordance with the Sunnah, has been delivering fresh Qurbani to UK’s poorest communities ever since. This year we plan to distribute over 5,000 kg of high-quality meat to families facing financial hardship, as well as to the elderly, shelters, and local centres to ensure those who need it most benefited from nutritional meals during the period of Eid al Adha.

How Does it Work?

For those wondering how to give Qurbani in the UK, once you donate to our UK Qurbani, Muslim Aid will then instruct our recognised and registered slaughterhouses to carry out the sacrifice on your behalf. We follow strict shariah guidelines to ensure this is implemented on the 12th of Dhul Hijjah, which will be on Friday 9th July 2022 (depending on the sighting of the moon and confirmation of Eid.)

The animal sacrificed is a hogget, a lamb in its second spring or summer, aged between one and two years. While still tender, a hogget's extra time on pasture allows it to develop a flavour that is richer and fuller. When it comes to the sacrifice, each animal is slaughtered quickly and painlessly to ensure they do not suffer needlessly. In accordance with the prophetic traditions, we then distribute one-third of the meat to the needy. In this instance, those vulnerable communities within the UK who rely on food banks and donations to keep their families afloat. The remaining two-thirds are then delivered directly to you as is the Sunnah. (Delivery date will be on the third day of Eid).

The day before Eid, all animals are checked for good health and to ensure they are of the right age (hogget, a lamb which is now past 12 to 24 months old but not yet a sheep) including their teeth. Animals that are not suitable for Qurbani are then removed, such

reasons may be because they are limping, blind, have missing teeth, and/or are injured. Only the best quality animals are selected for Qurbani.

After Eid Salah, the animals then go through the slaughter process. A list of those who have placed orders for Qurbani through Muslim Aid’s UK Qurbani is also given to the slaughterer. This is to ensure the animals sacrificed are in the donor’s names (which is very important as the animal must belong to the person before slaughter for the Qurbani to be accepted). Alhamdulillah, your Qurbani obligation is then complete.

Muslim Aid does not compromise on quality, and we have therefore chosen a partner that has the following credentials:

· Previous winner of the Butcher of the Year Award

What is Qurbani Meat?

Qurbani meat refers to an animal that is sacrificed during the days of Qurbani. This meat is then split into thirds, whereby the donor receives two shares: one for them and one for their family/friends. The final third is given to the needy.

What is Qurbani Called in English?

The term Qurbani is derived from the Arabic “qurb”, which translates to nearness. As a result, Muslims perform Qurbani to bring themselves closer to Allah (SWT).

Am I Allowed to Do More Than One Qurbani?

It is permissible to carry out more than one Qurbani, as you can donate and/or sacrifice on behalf of someone unable to carry out their own. This means that, as well as your own, Qurbani rules, allow you to donate in the name of a Muslim brother or sister who is no longer with us.

One Qurbani is the minimum, though there is no upper limit set which means that you can carry out as many Qurbanis as you like. As long as you offer at least one Qurbani which can be shared in three ways, this will be in keeping with the rules.

For example, you may wish to undertake one Qurbani in the UK and one abroad, which is permissible. Our Prophet (PBUH), himself, carried out multiple Qurbanis.

This year, we ask you to support your local community with Muslim Aid and donate towards a UK Qurbani 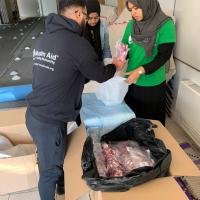