The Five Pillars of Islam

In Islam, it is important to recognise and acknowledge one's duties and obligations towards faith. As Ramadan is not too far away, now is as good a time as any to educate ourselves on the five obligations of a Muslim in Islam. 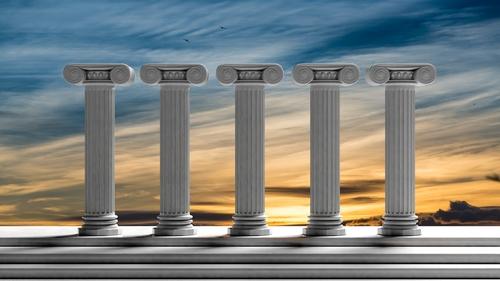 Shahadah is the term given to making a declaration of faith and dedication to your belief that there is only one God, Allah SWT and that he sent His Messenger, Prophet Muhammad (PBUH) to guide us. As the First Pillar of Islam, Shahadah is one of the most important and acts as your first submission to Islam and announcing your intention as a true follower. Reverts to Islam are also required to make Shahadah as their first act of joining the faith and this serves as an affirmation of their commitment to their faith.

To make Shahadah, intent is important, and you must recite the declaration sincerely three times with intent in your heart and mind.

Salah, also written as Salat, is the second Pillar of Islam and the act of obligatory daily prayer that is carried out five times a day at set times. The five prayer times fall between sunrise and midnight, although the times change depending on where you are in the world and the time of year, in line with the lunar calendar. The prayers in order are as follows;

- Fajr; dawn, before the sun has fully risen

- Zhuhr; midday, once the sun has passed the highest point

- Asr; late afternoon, and before the sun begins to set

- Maghrib; after sunset, once the sun dips below the horizon

- Isha; between sunset and midnight

Part of the ritual of Salah is purifying your physical self (ablution) in preparation for prayer, this is a cleaning ritual known as wudhu and is an important first step that also washes away minor sins.

Adhaan, the call to prayer, is broadcasted from Mosques to announce the set time for Salah throughout the day. Although this is normally recited at Mosque, Muslims performing Salah at home can also recite adhaan at the exact time before they perform their daily prayers.

Whilst Salah is an act of worship to Allah SWT, it is not, in any way, shape or form, for anyone’s benefit other than oneself - Salah is an important reminder that there is no one greater than Allah SWT. During Salah, the mind should be free from any other worldly thoughts.

Many Muslims prefer to pray in congregation at their local Mosque which is a great way of demonstrating humanity and equality in Islam – in other words, we were all created by Allah SWT and we shall all return to Allah SWT.

Zakat literally means ‘to cleanse’ but is recognised by many as ‘charity’. In Islam, it is believed that Allah SWT has intentionally created different levels of wealth for each individual to test humanity and generosity amongst believers. Every year, Muslims pay a 2.5% share of their held wealth (cash, property, gold, and silver) over a certain threshold to charity to help those less fortunate than themselves.

An important lesson of Zakat is the acknowledgeable that nothing we gain in this world is ever truly ours, it will not accompany us to the Hereafter, and it has no use to be buried with us. Rather than our wealth, it is our good deeds towards those who need help and support that will help us enter Jannah (Heaven) and this shouldn’t be forgotten.

The belongings we have in this world are just that – material items - and these items provide no spiritual guidance. Instead, it is how we use the wealth and materials we have gained to help others that will enhance our journey to the Hereafter and help us to let go and turn away from greed.

In addition to Zakat, it is also good to give to those in need whenever we can. Whether it is to help those overcoming worldly conflicts and emergencies or those suffering from poverty and hunger, each and every act of giving is greatly rewarded in Islam – be it in our today or in our Hereafter.

Donate your Zakat with Muslim Aid and help our less fortunate Brothers and Sisters receive food, medication, education, and shelter.

The term Sawm means to fast, which is where the month of Ramadan comes in. Fasting during the holy month of Ramadan is more than simply avoiding food. It is the practice of discipline and the abstaining of temptations and bad habits. From sunrise to sunset, able Muslims should avoid food and drink (including water), sexual activity, smoking and intoxication and any impure thoughts. Throughout Ramadan and the rest of the year, everyone should abstain from acts of evil and causing harm to oneself or others.

As Ramadan can fall in different seasons year to year, the total time spent fasting can change. In the summer, the days are much longer and fasting can be difficult in the hotter weather but in the winter, days are shorter and the temperature is much cooler.

There are two named meals when fasting, they are Suhoor, which is the morning meal and is to be eaten before the sun rises and Iftar, which is the evening meal and may only be consumed at or after sunset. The daily fast is traditionally opened and closed with dates, which carry numerous health benefits.

As the Islamic year is based on the lunar calendar, it rotates by around 11 days each year; the month of Ramadan is the ninth month of the Islamic calendar. It is an incredibly auspicious month in which the initial verses of the Holy Qur’an were bestowed upon Prophet Muhammad (PBUH) as a guidance for all mankind. This happened during the final 10 nights of this month, which is one of the many reasons why Laylat-ul-Qadr (the Night of Power) holds so much significance.

One of the key principles of this month is to attain taqwa (closeness to Allah SWT) and to instil fear of Allah SWT. The month itself holds countless rewards for those who seek repentance, practice, and give to charity.

Certain individuals may be excused from fasting subject to their circumstances - such as those who are ill, expecting a child, are underage, and so on. There are also certain exclusions for those who are travelling during the fasting day, too. Some of these exclusions entail a forfeit by way of donation if the individual cannot make up the fast later. This is commonly known as Fidya.

Ramadan is then concluded with the festival of Eid-ul-Fitr, which is a day many Muslims choose to spend with family and loved ones. The day begins with congregational prayers at the Mosque, prior to which, Zakat-ul-Fitr (fitrana) is offered to those in need. Following this, Muslims celebrate and rejoice with close ones, praying, eating, and sharing gifts.

The fifth and final pillar of Islam is Hajj, the annual pilgrimage to Mecca. It is a time that Muslims from around the world congregate in Mecca to worship Allah SWT and perform several rituals to strengthen their faith and devotion. Pilgrims must wear plain white clothing and enter a spiritual state of holiness, known as Ihram. Ihram helps promote unity amongst the Ummah in attendance, for no man or women, rich or poor, resident or traveller, stands above another. Regardless of our age, ethnicity, status and race, in the eyes of Allah SWT, we are all equal.

Hajj falls in the 12th and final month of the Islamic calendar, Dhul Hijjah, from the 8th to the 12th. It is a journey that every Muslim is obligated to take at least once in their lifetime and is a spiritual time that allows you to become closer to Allah SWT.

*Please check with your local mosque for times and dates nearer the time.

Muslim Aid supports many campaigns throughout the year, including our Zakat Appeal, Qurbani Donations and our Need is Greatest campaign. Help us save lives around the world and donate to support a good cause today.