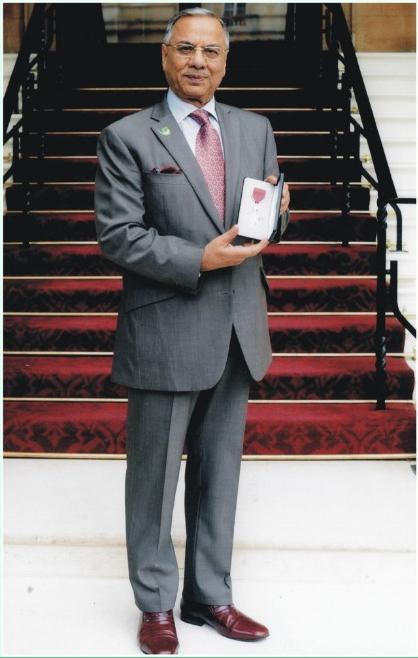 We are honoured and privileged to pay tribute to one of our dearest, most beloved and respected colleagues who will become a Patron of Muslim Aid from September of this year. Mohammad Walayat Khokhar MBE, has been an integral part of the Muslim Aid family for nearly three decades.

He first joined Muslim Aid as a volunteer helping out with community fundraising and activities ‘the old school way’ in the earliest years of the charity. Over the years, he has worked tirelessly across the UK and abroad building lasting relationships and partnerships with local communities, organisations and prominent figures and leaders within and outside of the Muslim community. Without doubt he is one of the most trusted and popular figures to have ever represented Muslim Aid and has dedicated his life to the service of others.

“It has been my great privilege and honour to serve Muslim Aid. I am humbled by the love and recognition the trustees, staff and donors have shared with me over the three decades I have been involved. I would also like to thank Allah and then Muslim Aid colleagues past and present for allowing me to serve humanity as a volunteer, donor and supporter. Any rewards and accolades I have received have only been through the association I have had with this great organisation. The work of this organisation has only become more important. We have our challenges no doubt, but with God’s permission and the prayers of our beneficiaries and donors, I believe we will continue to be there for those that need us most around the world. Thank you.”

“There is no doubt that Mr Khokhar is someone who epitomises the core values and principles that Muslim Aid stands for and was founded upon. We owe him a great debt for his commitment and service to Muslim Aid over these many years. The love and affection of colleagues and members of the community towards him is something each and every one of us should aspire to in our charitable work. We feel honoured to have him continue to serve as a Patron and representative for this great institution” said Interim CEO, Kashif Shabir.

We expect that many of our volunteers, supporters and donors will no doubt continue to see him around from time to time carrying out the mission of Muslim Aid in its service to those most in need, insha’Allah.

Our warmest and most sincere thanks to Mr Mohammad Walayat Khokhar, MBE. A true ambassador of Muslim Aid….!