Save Sylhet from Flood 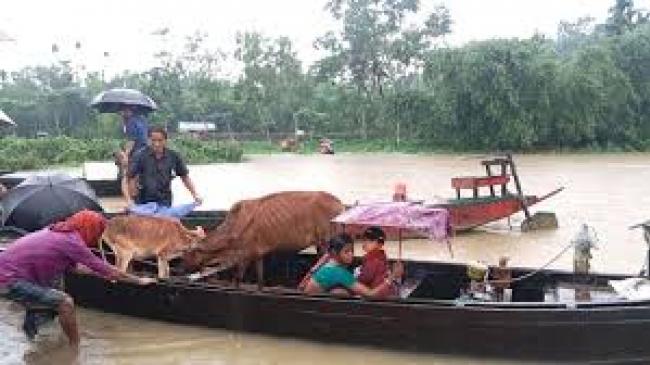 At least 62 people have died and millions of homes were left underwater after floods hit north-eastern in Bangladesh. Bangladesh have asked the military to help with the extreme deluge, which officials fear could intensify with further rain forecasted for the weekend.

At least 15 people have been struck dead by lightning in Bangladesh since Friday, and four people were killed in landslides, police officials said.

The flooding in Bangladesh, described by a government expert as potentially the country's worst since 2004, was exacerbated by the runoff from heavy rain across Indian mountains.

The Brahmaputra river, one of Asia's largest, breached its mud embankments, inundating 3,000 villages and croplands in 28 of Assam's 33 districts. "

Water and sanitation facilities will be destroyed, washed away," WaterAid's acting country director Hossain I Adib, said of "some of the worst flooding in decades".

Clean water will be contaminated as toilets and latrines overflow, ramping up the risk for disease outbreaks, he said, as he called for improved access to clean water.

According to the United Nation's climate science group the IPCC, about 17% of people in Bangladesh would need to be relocated over the next decade or so if global warming continues at the current rate because of rising sea levels. So they need food and drinking water.

Please help as urgent as possible .

When a disaster strikes, a delay in response can be deadly. Help us to respond urgently, saving and protecting as many lives as possible. A donation of just £30 could help save a life.

When a disaster strikes, a delay in response...