A Sincere Thank You From Muslim Aid

Muslim Aid would like to take this opportunity to sincerely thank all those who have supported us over the last 20 years. In today’s post, a special thanks goes out to our volunteer workers who work tirelessly around the clock to ensure our campaigns are successful. We would like to express our sincere gratitude for their amazing work collecting pledges for the Gaza Emergency campaign. We rely on the generous donations of our supporters who pledge to our numerous campaigns; none of which would have been possible if it wasn’t for their support. 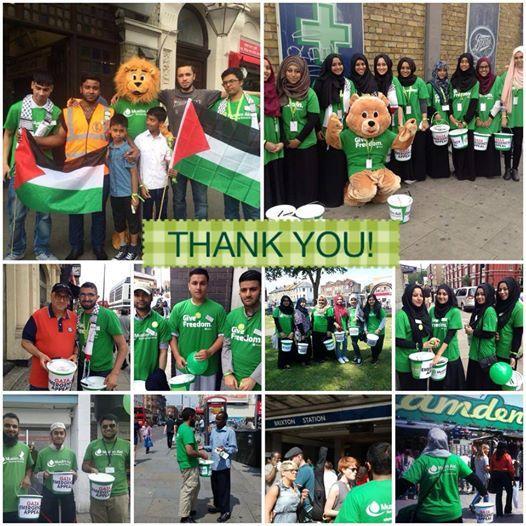 Part of our job is to create awareness among the Muslim community about the world events that impact Muslims worldwide. The Syria crisis is one example. The situation in that region prompted Muslim Aid to initiate the Aid for Syria campaign. The recent situation in Gaza is even more dangerous and has become a cause for great concern. Things have escalated significantly in a short amount of time and hundreds of innocent lives have been lost with thousands more left injured.

It is events like these that compelled Muslim Aid to act and come to the aid of the people of Gaza. In response, we organised the largest collection in London. This was the largest street collection ever in the history of Muslim Aid and to pull it off, we needed a great number of volunteers who would go to different boroughs of London and collect donations. This relief aid drive was conceived, planned and executed in a matter of days. The situation in Gaza was desperate and there was an ever-present need to get relief aid packets en-route to Gaza as soon as possible.

As always, our supporters did not disappoint. We received a huge influx of people wanting to volunteer for the campaign, dozens of helping hands wanting to make a difference and do their part. This was despite the fact that many of the volunteers were fasting, this being the month of Ramadan. It seems that fasting only made them more determined to conduct the Gaza relief aid drive and collect donations. The results were astounding. Muslim Aid conducted its largest ever street collection in London in its 20 year history. Our supporters and volunteer workers actively collected donations and covered over 20 London Boroughs; a record for any Muslim Aid campaign drive.

The funds collected from this drive will be put towards Gaza Relief Aid project. Relief aid packages are already underway and more are en-route. As a relief aid agency, it is our duty to ensure every penny collected is properly spent to the betterment of others. In the coming days we will update our viewers and fans more about our Gaza Relief Aid efforts. For more information, please visit the Muslim Aid Blog and check out the Muslim Aid website for the latest information on the Gaza campaign as well as many others.