Muslim Aid greets this Ramadan (Sunday 5 May to Tuesday 4 June) with a unique focus on channelling charitable donations to wherever the actual “need is greatest.” Picture a destitute Syrian refugee in Lebanon in need of shelter, or a traumatised Rohingya family in Bangladesh in need of clean water.

The Need is Greatest campaign is being executed with a burst of modernity, using a diverse range of ordinary British Muslims directly displaying their amazing feelings about the spiritual highs Ramadan generates, including through donating to those in need via Muslim Aid.  Fatiha El-Ghorri, a writer and comedian who satirises Muslim stereotypes on stage, giggles, showing how uplifted she feels to give her Zakat to those most in need.

The theme of the amazing feelings produced by Ramadan and the requirements it makes of people is continued throughout the materials – one advertisement says “Do something amazing this Ramadan...Feed the Fasting”.  For Muslims in the UK, and across the world, the holy month of Ramadan is one of the most spiritual times of the year. It is a time of self-purification, a time of reflection and prayer, a time of fasting and a time of selfless giving.

And that manifests largely through voluntary donations and “Zakat”, the obligation required for all observant Muslims over a certain income to give a set proportion of one’s wealth to the poor and vulnerable.  Zakat is one of Islam’s five pillars.

“Muslim Aid profoundly recognises this importance,” says Director of Business Development, Zac Hussain. “Being a funnel for Zakat is a privilege and a weighty responsibility. We can use our long-standing experience to reach out to those truly in need of your help and generosity.”

In the past few years, Muslim Aid has moved away from negative images of poverty and distress to show the dignity of beneficiaries and their supporters here in the UK.  Another one of the ordinary British Muslims used in the Need is Greatest visuals is journalist and martial arts instructor Taufiq Wan who smiles broadly in the appeal banners giving his Zakat to Muslim Aid.  Sharing his amazing, unique experiences of Ramadan, he says:

“Ramadan, for me, is trying to keep up my martial arts schedule and teaching it as well as trying to fast.  So how I get around that is that I train either just before breaking fast or just after.  One of my favourite parts of Ramadan is eating food and spending some time reflecting and reconnecting with my spirituality.  The best part is of course spending time with family and friends”.

The Muslim community is very generous. The majority of the 1.8 million Muslims aged 16 to 64 living in the UK will contribute to charity during Ramadan. Over the same period in 2016, British Muslims donated over £100 million to charity, or an incredible £38 per second!

The pre-Ramadan campaign has just gone live across Muslim Aid’s digital channels, TV adverts on ethnic media and a direct mail pack to supporters. A mixed marketing campaign will run across the UK throughout the month of Ramadan – on over 54 roadside billboards, 200 bus rear panels, 36 London Underground ticket-gates, 167 lamp-post flags throughout London and 82 outdoor digital boards around the country in places such as Bradford Shopping Centre, the M25 and the Birmingham flyover.  There will also be live broadcast appeals including on the Islam Channel and Channel S.

The month will be celebrated with a range of Muslim Aid fundraising, community and cultural events.  London Mayor Sadiq Khan and international journalist Jon Snow will pop along to street iftars that break the day’s fast. And celebrities including former Masterchef winner Saliha Mamood Ahmed and Ken Hom have offered up their favourite dishes for breaking the day’s fast during Ramadan. 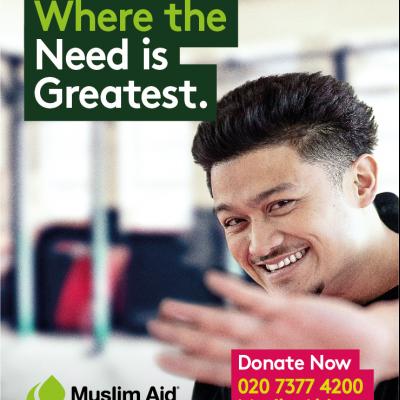 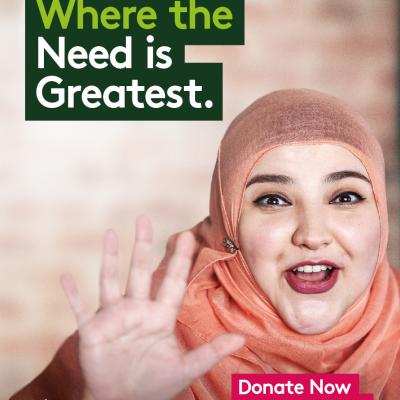