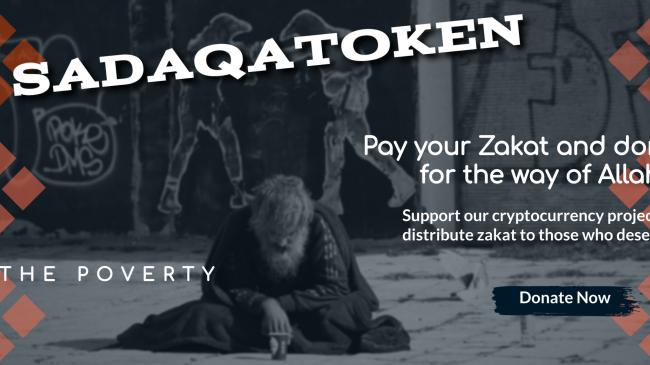 THE SOLIDARITY PROJECT TO COLLECT ZAKAT

My project consists in a concise way in collecting donations as a surerogatory but also the Zakat which is a religious tax which represents 2.5% of the savings and goods on a total duration provided that the threshold of the Nissab is exceeded. The Zakat collect will distributed to Humanitarian organisations and Organisations fight against climate changes and deforestation.

THE STORY TELLING BY THE FOUNDER

My name is Sadoqi Eljabir, I have been passionate about cryptocurrency since 2014, but I also have the flaw of being altruistic. I decided to remain anonymous to carry out this project, I think that my project is very much inspired by the BITCOIN project, like "Satoshi Nakamoto" who also decided to remain anonymous while supervising his project through an intermediary.

The designer of the Shiba Inu "Riyoshi", also inspires me a lot, his project Shiba Inu is a real success…

This crownfunding campaign is important to me because it will help me to make my project a reality and my project will allow charities to distribute food and to be a cog against precariousness. You will also allow environmental organisations to replant trees and fight against global warming...

The impact of our project

I know the world of humanitarian aid and I have participated in food distributions and I know what it is to see a smile on the face of a deprived person. We must not underestimate the impact of our isolated actions on the consequences that they have on a global scale.  Unfortunately we cannot rely on government institutions, people have to act on their own with their own means.

Your donations will serve to set an example to the world of crypto-currencies and finance where the motto for most is only "speculation and gain". Where is the human part in this ?

Understand that Zakat, this religious tax which represents 2.5% of our income, concerns 1.8 billion Muslims, at least 1/3 of whom must pay Zakat, imagine how much 2.5% of the savings of some generous Muslims in the Persian Gulf would represent.

I have provided you with some statistics that we have done.

My project consists in a concise way in collecting donations as a surerogatory but also the Zakat which is a religious tax which represents 2.5% of the savings and goods on a total duration provided that the threshold of the Nissab is exceeded. The Nissab is the equivalent of 85 grams of gold and 595 grams of silver, a threshold that must not be exceeded.

Therefore, any Muslim who has savings and assets equivalent to 85 grams of gold in a year must pay a tax of 2.5% "Zakat"...

That’s Why i create the SADAQATOKEN « SDT », a BEP20 token, based on the Smart Binance Chaîn, which offers a lot of advantages. There is 1 billion tokens…

But there are also times when Muslims are very generous, such as Ramadan, when Muslims give huge amounts of money.

This money is therefore an annual income, which will allow the project to avoid a big "Bear Market" period and allow the donors of the zakat to store it for a year without being rewarded, as usurious interest is forbidden in Islam.

What I wish to achieve with this project is to be a cause to make this world a better place, my project is not restricted to Muslims only, but to all those who suffer on Earth, and the Earth itself by funding organizations that act against climate change and deforestation. "Making the Earth better" is my motto.

Concerning the financing of this project, the ideal sum to collect would be 10 000 dollars, but I will be satisfied with 3000 dollars, you will also be able to buy my token which will participate in the development of this project.

This sum is explained by the amount to be paid into a liquidity pool which is at least 1500 dollars, then we have the costs related to marketing and awareness for the problems of precariousness and environment. Then the expenses to finance my team: graphic designer, consulting and webmaster... But the most expensive is without a doubt the listing with a centralized and reputable exchange, in order to guarantee the funds of all investors, small and large... And finally an audit to verify our project would be the icing on the cake. So you understand that you, O patrons and benefactors, are the key to this project.

Our project is unique because it is the only project in the cryptosphere that proposes to collect zakat and donations without giving a reward related to staking or investment because in Islam this is considered religiously forbidden and is called Ribba. This is proof that this project is not speculative and opportunistic.

This project has the noble objective of creating long term humanitarian projects, hospitals, schools, I specify that this project is apolitical and that is important! Then we feel concerned by the problems related to climate change and deforestation, when man goes wrong, the earth also goes wrong ...

This project is also profitable for investors, firstly on a spiritual level as the donations will be multiplied by God, for non-believers and speculators, it is enough to know that Zakat is paid every year and the donations during the month of Ramadan exceed millions of dollars worldwide.

There is an important concept in Islam regarding almsgiving, it is Al Ikhlass, it is a sincerity with which we are supposed to act only for God and not to collect thanks or be exposed to ostentation.

Then I think the success of Bitcoin and Shiba Inu are related to this...

One of our mottos is transparency and as soon as we receive the first funds, a section will appear on our website to show the progress of the project and what we have achieved with evidence. We are also considering including a clause in our contract to avoid the capital being exclusively in the hands of certain people, and that they only own a part that put the project in danger.

The SDT is not specific to Muslims, it is a humanitarian and environmental project, which is a common base for all humans. But Muslims could be the majority of investors as Zakat is a Muslim tax.

How can you help us with this project ?

Of course, donations are the best way. Then you can buy our token and thus help our project and maybe win when the price of the token increases by consulting these instructions:

Dou'as are also welcome, advice too and talk to the Ummah, if you know sheikhs or imams of mosques or bloggers or influencers.
On the technical side, graphic designers and coders can also help.
Also share our social networks and especially the magnificent website :

Visit also our website, you will find all the information you need.

Masjid Al Aqsa is under attack in the holy month of Ramadan once again. Since the first Jummah of Ramadan there have been near daily attacks causing injury to hundreds of worshippers and considerable damage to the holy site. Donate now to Defend Masjid Al Aqsa.

This fundraiser is a part of

Masjid Al Aqsa is under attack in the holy...