Hosted by Rehman Chishti MP, the launch, which took place at the Terrace Pavilion in the Commons, showcased the difference Muslim Aid has made to the lives of people facing poverty, conflict and natural disaster across the world.

Guests, including donors, diplomats, media, public sector representatives and community leaders were given a glimpse of some of the work Muslim Aid has done, from providing children with access to schooling, to helping families earn a living through the charity’s Livelihoods Programme.

Attendees also saw the positive impact last year’s funding has had on the lives of those affected by conflict in Syria, as a live link featured children who have found refuge in the Beity orphanage in Turkey, funded by Muslim Aid.  The children who escaped civil conflict now have the opportunity for a better future thanks to generous donations from the public.

The event also revealed the theme for this year’s Ramadan campaign, You Give We Serve, which celebrates the accomplishments of the generous supporters who have helped Muslim Aid in serving humanity.

Last year, Muslim Aid raised an unprecedented £7 million during Ramadan, enabling the charity to support thousands of beneficiaries.  Muslim Aid’s “Feed the Fasting Programme” reached 40 countries around the world, and also extended to homeless people in the UK, while people affected by the war in Gaza received vital life-saving support.

Since its inception in 1985, Muslim Aid has been raising funds during the month of Ramadan – the time of year when most Muslims give to charity – which has gone towards providing essential humanitarian support to poor and vulnerable communities throughout the year. The funds raised also ensure the delivery of vital sustenance to the most impoverished during Ramadan.

Speaking at the event, Chairman of Muslim Aid, Dr Manazir Ahsan MBE, said: “Our gratitude to our supporters is boundless. It meant we were able to deliver urgent aid to countries that needed it the most.  Thousands of people benefitted from sadaqah, zakah, support and kind donations.  The outpour of support from the public has allowed us to continue serving humanity.”

Mary Creagh noted her interest that Muslim Aid provides food support in the UK. She wished the audience a happy Ramadan and added that “people of all faiths and no faith support [Muslim Aid’s] work, the brilliant charity that you’re doing in this special time.”

Rehman Chishti praised Muslim Aid’s work as “highly outstanding” and added that Ramadan is "…the time for you to help those who are weak and vulnerable around the world…people in poverty are patient, and each and every one of us has a moral obligation to help them."

Echoing support from his colleagues, Minister John Penrose reminded the audience of the ongoing need for humanitarian aid noting that the need is “no less than it has ever been.” He went on to praise Muslim Aid by stating: "The help Muslim Aid provides is needed and appreciated around the world…I hope that Muslim Aid’s campaign this year is even bigger than the last."

For further information, or to request an interview, please contact:

Muslim Aid is a relief and development agency set up in the United Kingdom in 1985 to provide humanitarian assistance to disaster affected countries and to help poor and vulnerable communities overcome poverty.

Muslim Aid delivers relief and implements programmes in over 70 countries worldwide, working with all communities irrespective of faith, ethnic origin or political system.

For further information about the work of Muslim Aid and its overseas field offices, please visit the Muslim Aid website at www.muslimaid.org or go to our Twitter Account Muslim_Aid or contact the Information and Public Affairs Department on (+44) 020 7377 4200, [email protected] or via post on PO Box 3| London | E1 1WP 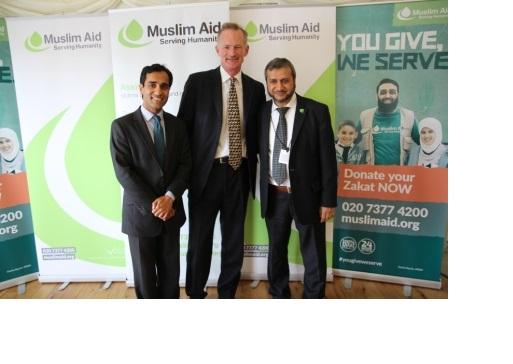