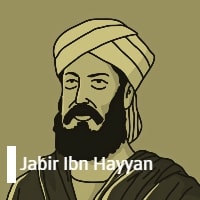 Who was Jabir Ibn Hayyan?

Jabir Ibn Hayyan was a polymath who developed science and was responsible for scientific experiments and chemical processes like distillation, oxidisation, filtration, crystallisation, and many more. He also discovered Sulphuric acid and Citric acid among other things. In the eighth century, he was one of the most noteworthy philosophers. Aside from this, he was an alchemist, astronomer, engineer, physician, and physicist and became known as the father of chemistry.

He was a student of Imam Ja’far al-Sadiq, who was well educated in Islamic knowledge but also natural sciences, astronomy, chemistry, mathematics, and other subjects. He also took lessons in alchemy from ministers of the Caliph Harun al-Rashid and wrote a book, ‘The Book of the Blossom’ for the Caliph about alchemy. However, he had a disagreement with the Caliph and was sentenced to death in 803. Jabir Ibn Hayyan tried to escape the sentence by fleeing to Kufa, which is modern-day Iraq, but was found by the authorities and placed under house arrest, which he served for the rest of his life. Jabir Ibn Hayyan passed away in around 815. 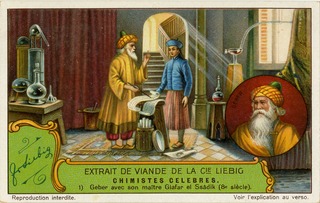 ‘Gibberish’ is said to have come from the descriptions of his writing. He wrote in a way that no one else could understand, which he knew would be the case. However, his work benefitted the Muslim and wider world, and inspired the search for the legendary philosopher's stone, said to be able to turn metals into gold.

Jabir Ibn Hayyan was born in 721 AD in Iran, which was during the Islamic Golden Age. The Islamic Golden Age dated from the mid-seventh century to the mid-13th century. During this period, Muslims all around the world, including poets, artists, scholars, philosophers, and mathematicians contributed greatly to the economy, technology, sciences, literature, and much more. It was their work in different fields that made the Islamic empire so strong.

The Muslim empire was the first ‘universal civilisation’ where diverse races came together, including the Chinese, Indians, North Africans, and White Europeans. This was the start of collaborative creativity, where ideas and goods were traded and shared, particularly in central areas of Muslim gatherings and learning spaces, one of which was Baghdad.

The Islamic Golden Age ended in 1258 CE, when the Mongols, led by Genghis Khan, invaded, and attacked the Muslims in Baghdad, destroying many of their achievements.

Jabir Ibn Hayyan made ample contribution to the Muslim community. You can make yours via a donation to Muslim Aid.